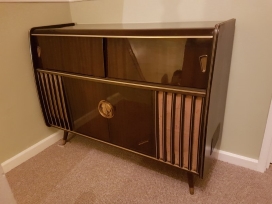 Look at that interface!

The Blaupunkt Arkansas De Luxe - the third most elusive device on the Internet, is a grand work of art. It's built into a fiberboard box with a thin oak veneer finish; a thin fabric interiored indentation to serve as a "cocktail cabinet", and a very inspired retro-looking interface.

I say "third most elusive device on the internet", i mean it. Sure, there are people that have found these things brand new, only requiring a quick polish and buff to get to perfect condition.

This is not one of those. My Arkansas De Luxe was thoroughly destroyed.

Okay, let's take a step back. Blaupunkt (Blue Spot in German) is a technology company that still thrives to this day. As a matter of fact, i recently bought a television from them. It stands to reason, then, that their old products would have somewhat a cult following, or at the very least a reasonable amount of documentation; schematics, diagrams, service manuals, that sort of thing.

Well, no. The Arkansas De Luxe, apart from vanishingly little posts on radio forums, has no online presence. Those radio forums claim that this page has detailed documentation and schematics - "everything you could need to repair these beasts" - but that was a lie! Even the Internet Archive's WayBack Machine has no trace of anything resembling an Arkansas unit on this page. What a con.

Without a trace of this thing existing on the internet then, what can we gather about it? Well, given that the rear plate gives you a basic layout of the main board, we can do some quick Googling and realise that these circles are... valves? Yes! This entire machine is powered by vacuum tubes. When we get to the thorough investigation later, we'll figure out if there are any modern electronics in here.

Given that this thing is a retro-looking radiogram, i'm placing modern right at the year 1958. This notably excludes the most manufactured device in human history.

Front shot, as it arrived 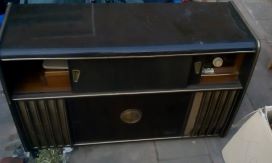 Snow of the storm 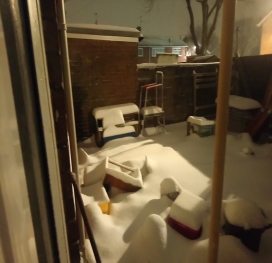 It arrived at my house along with family in need, who wanted a place to stay. They brought this thing with them for... unknown reasons, but that's not really relevant.

When they gave it to me, they wanted me to sell it. I attempted to do that, but unfortunately about two weeks after they arrived, the Beast From The East (a snowstorm of legendary proportion) landed onto the United Kingdom.

It covered the entire country in 5 to 6 inches of snow. Unfortunately again, I didn't have any space inside my house for the Arkansas, meaning it was outside at the time.

It's for this reason that I described the device so - it really showed its roots when the veneer cracked off and the MDF fell apart into wet dust.

Luckily, the first day the BFTE was forecast, i went out and scrapped the Arkansas, removing everything vaguely electrical and metal. This had the rather neat side effect of preventing them from complete destruction with the rest of the Arkansas.

The top of the main board 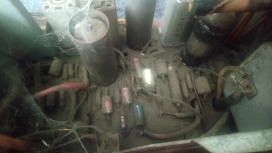 The first thing I noticed about the Console (the receiver and amplifier) was that it was incredibly dirty. These pictures do it no justice, as it was ridiculously filthy, covered in a cloth-like layer of cobwebs.

It'll remain like this for a while until I properly examine the condition of the components (mainly because at this point, i'd ran out of rubbing alcohol and compressed air, so i was reduced to scrubbing it with a toothbrush and paintbrushes to remove loose dust - which there was not a lot of!)

Upon actually looking at the device, though, we can see that the position of the thermionic valves (the fancy term for vacuum tubes, for those unaware) matches the layout on the back of the cabinet, seen above.


After a few days of sitting there, i finally managed to get some things together and give it a much better clean out. In the process, i found a label, but I couldn't make out the text initially. After some scrubbing, i was greeted to this label. This board was assembled on the 41st week of 1970.

That means it was between October 5th and October 11th, for the sticklers out there.


A little more scrubbing later, and i was well on my way.. But disaster struck! I took each of the (removable) tubes out to clean them off - if they heat up while dirty, the dirt will likely fuse to the glass - and this bad boy decided to snap in half. This shall henceforth be known as "The 84".

Naturally, this wasn't much of a disaster, since EL-84 tubes are cheap. Getting them safely delivered, however, is not. It was for this reason that I still don't have one in late 2020, over 3 years after I acquired the Arkansas de Luxe. 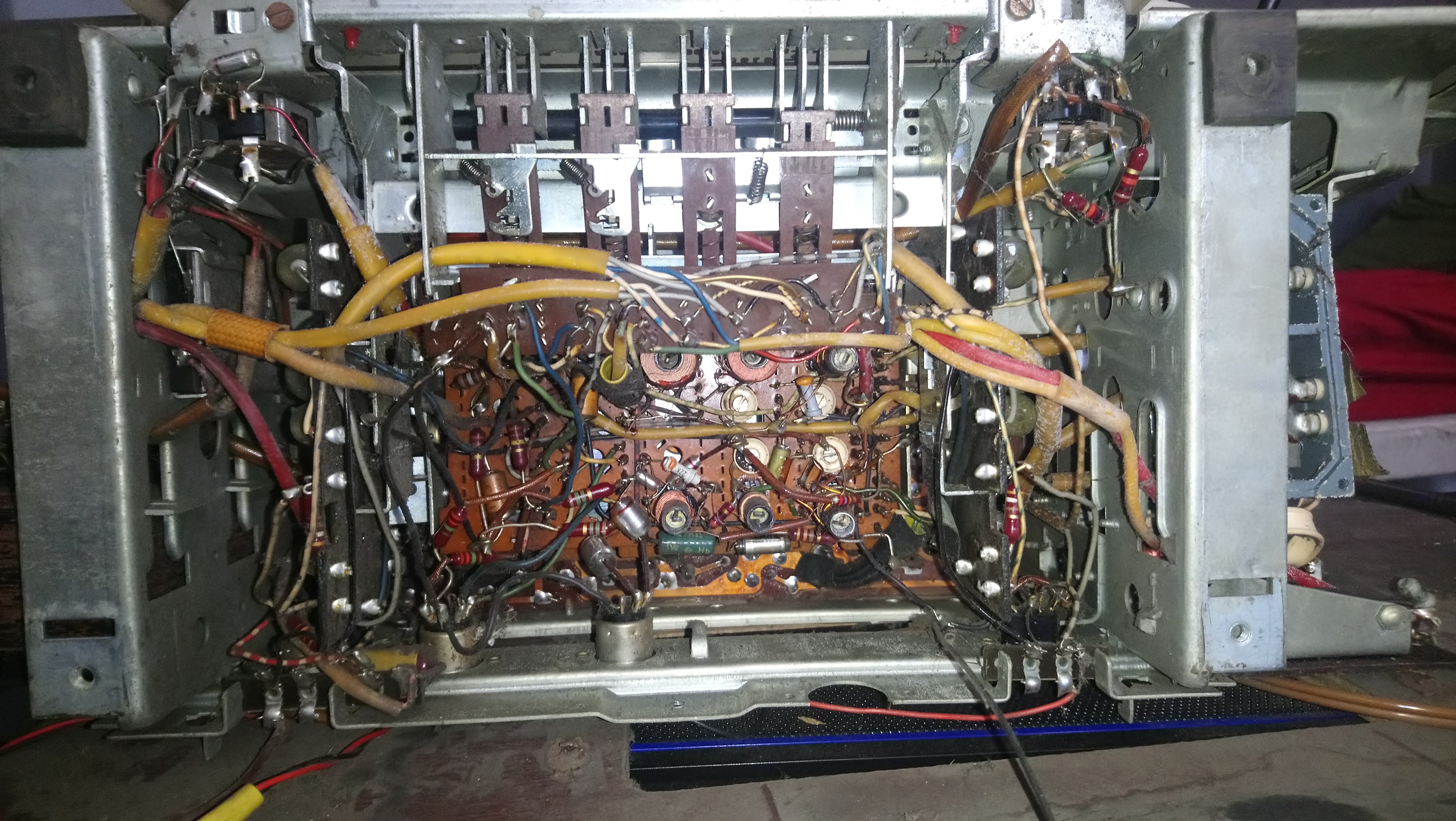 Eventually, the infernal machine cleaned up really nicely, though there were a few hitches. All of the large resistors were coated in some kind of wax that completely disappeared as soon as the rubbing alcohol touched it. This is merely a cosmetic issue, and i verified with a multimeter that the electrical properties were unchanged, but this is worth keeping in mind.

Looking at the undercarriage confirmed my suspicions. It's fully analog circuitry, all of the amplification is thermionic, and all of the tuning is superheterodyne. This meaning, there are no transistors in this machine. It's all done with vacuum tubes, capacitors, resistors and a lot of electrical cleverness. I would poke around and attempt to map out this circuit, but...

I mean, look at that thing. It's not meant to be looked at, that's for sure.